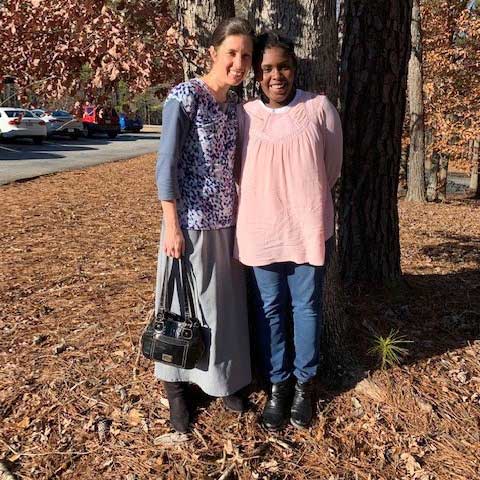 At the age of five, Akelia Keller had developmental delays and was working through the trauma of being abandoned in infancy. However, she eventually found her forever home with Sheila Keller of Augusta. As her daughter got older, she realized Akelia needed more help with her complex presentation of autism.

Akelia had been to several specialists before who would only treat her delays separately, however, her mother commends Youth Villages at Inner Harbour for helping her daughter as a “whole”. Sheila found that Dialectical Behavioral Therapy was one of the most impactful aspects of Akelia’s treatment. “That was very helpful, and that was something we would not have experienced before she was there,” she said. While at Inner Harbour, Akelia was also able to reach a level of independence that she may not have been able to accomplish at home.

Even after coming home, Akelia still talks about some influential staff members, specifically her teacher John Moss, “He just has that personality that can connect with anyone.” In the beginning, when Akelia felt hesitant about meeting her therapist, Moss went the extra mile to accompany her to her sessions. He was one of many people at Inner Harbour who received a visit from the Kellers, who recently took a trip to Douglasville.

The now 16 year old has grown to become highly verbal, and a lover of comedy. “Anybody that can crack a joke with her, is going to be on her favorite person list,” Sheila said.