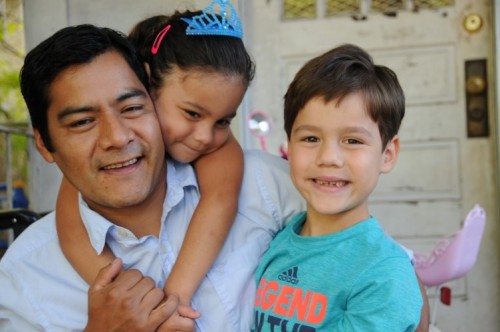 Alabama Dad goes the distance to reunite his family

Rudolfo Duenes was in Atlanta when he got the phone call that changed his family’s life.

His ex-wife, living in Birmingham, Alabama, had been found unconscious in her home. Drugs were involved. Their children, Gavin, 3, and McKenzie, just 2, had been alone in the house and had been taken into state custody for their protection.

The call came from a friend: “The kids have been taken away! Come home!”

So Duenes made the first of his bus trips from Atlanta to Birmingham. Hours on the bus not knowing how his children were, when he could see them, when he could get them back. Three days later, a judge decided that they were not safe in their mother’s care and put them into a foster home.

And this father’s fight to gain custody of his children began.

“It took so long,” he says. Three years.

He established a home in Birmingham, rented a house. But, he didn’t live there at first. His job was in Atlanta. He worked hard physical construction jobs, sometimes seven days a week. Before visitation days, he would get off work in the evening, ride the bus into the night, see his children for an hour or so. Then back on the bus, back to work.

He took parenting classes. Submitted to nine months of drug tests — that had to be done in Birmingham and involved more time on the bus — back and forth.

He kept working, fighting to get his kids back. Earning money to pay lawyers. Then, one day, he got help. Youth Villages Intercept, intensive in-home services program was assigned to his case. By this time, the children had been in a foster home for years. Angela Dixon, an experienced family intervention specialist, became almost a part of the Duenes family.

“He was so willing to meet every requirement,” Dixon said. “At one point, the children were slated for adoption. He kept fighting. He never missed a visit, never missed an appointment. He’d jump on the Greyhound and be here.”

Finally, they were placed at home with their father. But the transition was hard. By this time, they were almost more attached to their foster parents than their father.

Dixon met with Duenes three times a week, working to get the children settled in school and home, helping them strengthen and renew their family bonds and relationship.

“She helped me learn how to manage the kids and their behavior,” he said. Duenes enrolled the kids in a great school near his home — winning an enrollment lottery for McKenzie’s spot.

Being a single father isn’t easy, Duenes admits. His boss works with him when he needs time off for the kids. Dixon helped him learn how to care for a little girl, from hair bows to priincess outfits.

Duenes gained full custody of the children in January. They are happy, doing well in school, proud to be home with their dad. They love their father,  but are too young to understand the journey he made to reunite his family.

“I would tell others not to give up on reuniting with their children,” he says. “It’s worth it. One day my kids will appreciate what I did for them.”